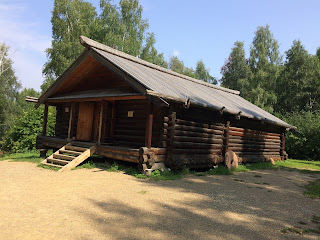 I walked down to the lake before breakfast, maximising my walking time there. The Taltsy Museum of Architecture and Ethnography  shows wooden architecture of Siberia across the centuries in an open museum in the forest with rebuilt chapels, watermills, and simple cabins.
One cabin showed the administration in the 18th century with the Tsar’s decree displayed. But the local administrators were not paid and they relied on bribes for income. Living in a forest requires many wooden adaptations to compensate for metal. Young brides were expected to bring many sheets to their new marriage home. I enjoyed the museum. It reminded me of the Welsh National museum in Cardiff with its collection of Welsh houses. 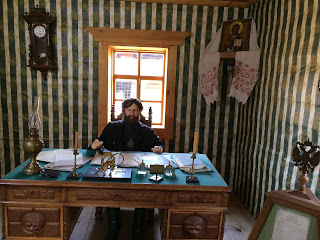 Our guide had learnt her English in Irkutsk University in 1974. Her mother taught on Russian culture and they had been to York University in the late 1960’s, so they must have been party members. Her mother moved to the USA; after perestroika and now back to Irkutsk. She has seen so many changes. Our guide’s grandmother who lived through The Revolution had seen most social and political change. 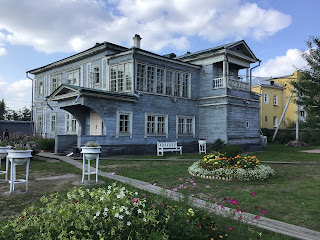 Ann and I went by tram to Irkutsk centre and visited the Volkonsky museum. This recreates the life of the Decembrist exiles were exiled from St Petersburg after their plot in the 1830’s. They were forbidden to communicate with their friends. Their wives were allowed to divorce them. However nearly all their wives followed them and supported their husbands in exile including writing many letters. They initially lived in a small Siberian village and relocated to Irkutsk after receiving a partial pardon.  They recreated their intellectual lives impressively with reading, study, meals and soirées. The house has been recreated room by room including library, music room, dining room and a large drawing room. Their energy was palpable.  The garden was good to relax in.

We bought fresh food and cheese for our journey in the Irkutsk central market, brimming with fish sellers. We eat in a tiny cafe and took the tram back to the station. We had a 3 hour wait here for our late night train which departed at 00.01. Russian railways provides sheets, duvets and towels and we slept well. We are on the train for 2 nights.